Thought Leader Series: A Cast Iron Skillet: The Iron Man of the Kitchen

Diane Balch lives in a rural horse town and is passionate about simple living and eating, as seen in her blog at SimpleLivingEating.com. On your mark, get set, grab your cast iron skillet and GO! The meal race begins...

Diane Balch lives in a rural horse town and is passionate about simple living and eating, as seen in her blog at SimpleLivingEating.com.

On your mark, get set, grab your cast iron skillet and GO!

The meal race begins at breakfast. Your cast iron skillet will fry up eggs, brown sausage, and make golden pancakes in a dash. Just wake up your skillet by warming it on a medium-high burner for a good ten minutes. If it is well-seasoned, eggs will glide off the pan like a non-stick skillet, and your entire morning meal will have a golden crispness to it. 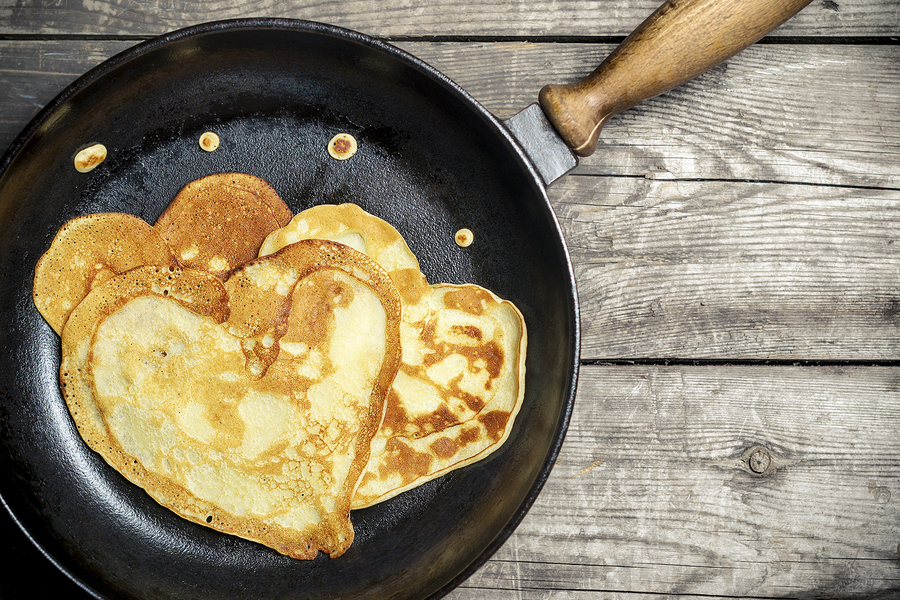 When you purchase your cast iron skillet, carefully follow the directions for seasoning it. The process will create a non-stick surface that is essential for getting the maximum use out of your pan.

Now it's time to break for lunch. 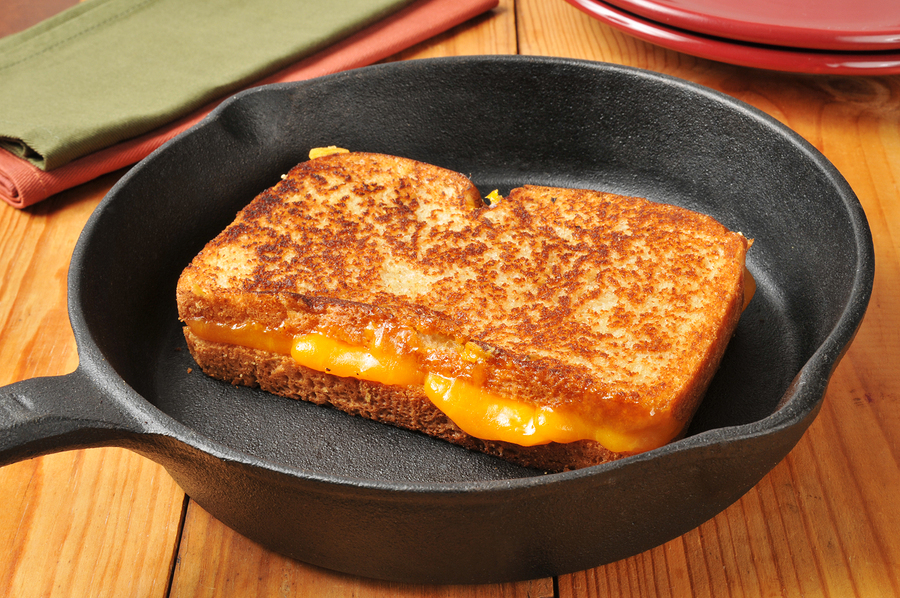 Grab your cast iron skillet again and toast up a grilled cheese, tuna melt, or make a panini sandwich in it by wrapping a brick with tin foil to press your sandwich as you brown it in your skillet.

The meal marathon doesn't end with your work day.

Time to jog over to the kitchen and warm up your cast iron skillet again. For a quick meal, rub a little bit of cooking oil into your pan with a paper towel and turn the heat up to high. Get your skillet sizzling hot before you plop down a piece of steak or chicken into it. Don't move the meat for at least three minutes to get a good sear on its outside. Flip it over and cook it for another three to four minutes. 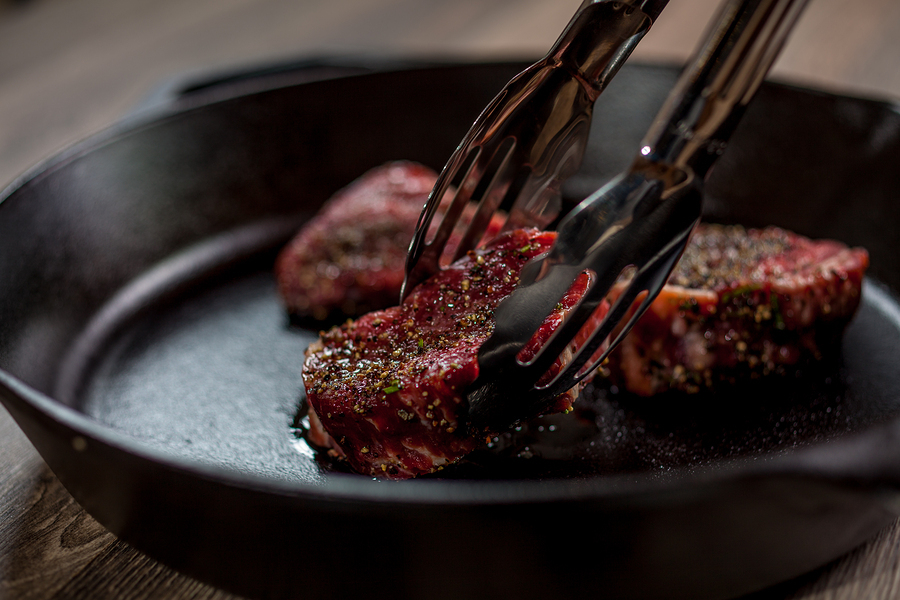 Now that the juices are sealed into your meat, place the skillet directly into a 350-degree oven for about five minutes or until the internal temperate read for your chicken is 165, and about 145 for beef. Let the meat rest for five minutes before you serve it. 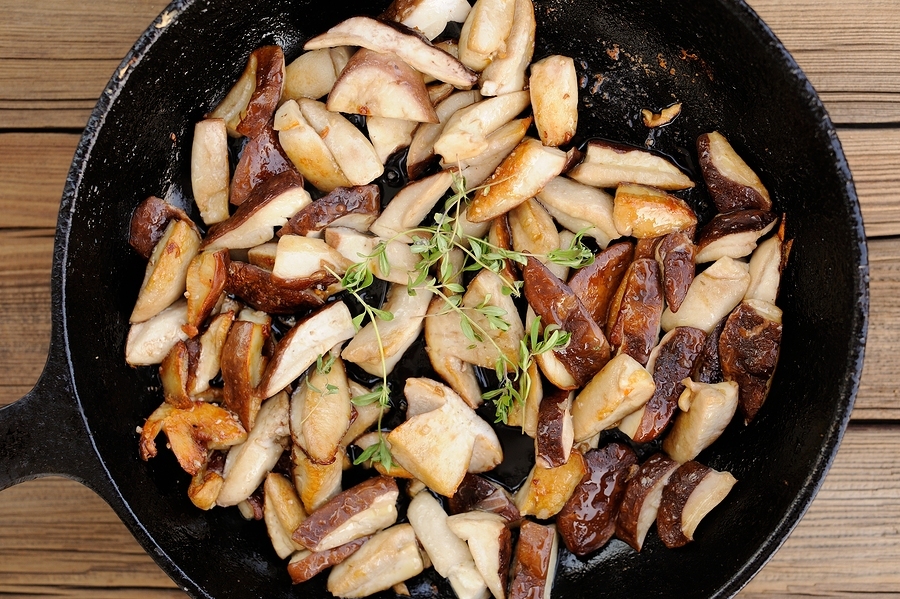 You may want to get an additional cast iron skillet so you can sauté up some mushrooms at the same time you are cooking your steak. Mushrooms get a great golden-brown color when they are cooked in a cast iron skillet with butter on medium-high heat. Just remember not to salt them until they brown, or the salt will release too much water and the mushrooms will steam instead of becoming golden in your pan.

Now for something sweet...

For dessert, try the rustic French pancake called a Clafoutis. Because a cast iron pan distributes heat evenly, you are guaranteed a golden crust on any pancake, pan bread, or pie you decide to cook in it.

To maintain your cast iron skillet's ability to run marathon cooking days for you, remember to scrub it with coarse Kosher salt right after you are finished cooking with it. Stuck pieces of food will come off of the pan easily while it is still warm. Rinse off the salt with warm water. Dry both the inside and the outside of the skillet before putting it on a medium-high burner. Rub the interior of the pan with a little bit of cooking oil on a paper towel, and let it sit on the heat for 10 minutes or until you see smoke just starting to rise from the pan. This is your cue to turn off the heat, but leave the pan to cool down from its race on the burner. It will be ready in the morning to sprint into action and begin the cooking marathon all over again for you.

Your cast iron skillet, when treated properly, will be the iron man of your kitchen for years to come!

Browse our cookware to select the cast iron skillet that is right for your needs!